A medium of travelling of the past?

Kuala Lumpur’s dream of working towards a world class smart city might be a reality soon to be realised, but not one without bicycle friendly lanes and facilities. Kuala Lumpur is known to be a city built for cars and in some areas, there are no proper pedestrian walkways and paths for cycling. Malaysia stands third in the world for car ownership consisting of 93% of households. During the humble times of post world war 2, bicycles and trishaws were commonly seen, until the 80’s with the creation of the national car, Proton. Malaysia was determined to be a developed nation proudly filled with locally built motor vehicles. From then on, the number of bicycles diminished and were used in small towns and kampungs where most journeys were just a stone throw away.

Cycling started to become a trend, many Malaysians were picking up cycling as a new hobby and some as a cheap an efficient way to get to school and work nearby. Volunteers such as Jeffrey Lim started to cut down a path utilizing crowdsharing by making it possible for cycling more adaptable to others on navigating Kuala Lumpur’s concrete jungle.

On social media, viral videos of stories such as The Malaysian who traveled from KL to London by bike or the Korean girl that cycled around the world for 60,000km in 5 years started to inspire others to do the same.

Major cycling events like the Car Free Morning in KL and the recent OCBC CYCLE 2017 increased the participation of cyclist bringing Malaysians from all cultures and backgrounds together on a journey towards unity and tolerance. These are just some of the few grass root movements that could potentially increase demand for cycling in Malaysia. 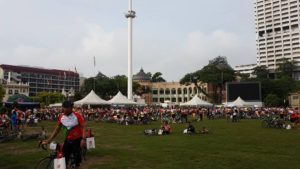 Professor Sugiyana did a study in North West Adelaide Australia in 2016 that the distance of residential areas is directly related with the circumference of its working adults. The main causes of this include the lack of active travel and excessive time spent sitting in cars. This is relatable for many KL lites who spend their days traveling to and from their workplaces and schools. The world bank data shows that traffic congestion wastes between 270 and 500 million man-hours in KL jams in 2014. Imagine the amount of overall weight gained by Malaysians in that year.

From the ever-rising fuel prices in Malaysia to a greater consciousness of our impact on the environment, Malaysians started to implement sustainable acts from using reusable bags to increased usage of public transportation and cycling.

Furthermore, in conjunction of the world urban forum on February 2018, Kuala Lumpur will have its first ever dedicated bicycle lane that stretches for 3km through the heart of the city. This was announced by Kuala Lumpur city hall senior deputy director. Although its currently in its testing phase on its feasibility and benefits, it may be a catalyst to a greater change, one that will determine our choice and method of commuting around. 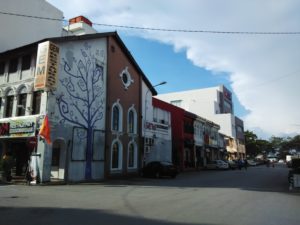 Penang is already on its way of becoming a bicycle friendly city as it has begun allocating bicycle lanes while cleaning up existing back lanes. This is especially prevalent in Georgetown making it a less congested city and aiming to boost tourism. The Penang Island City Council (MBPP) mayor Datuk Maimunah Mohd Shariff said that currently with 25 bicycle stations, Penang is working its way towards being more connective and residents are able to safely cycle from one island to another.

Meanwhile in Johor, Medini City’s 22 km bike lane kicks off as an attraction for residents to enjoy the scenery and public art displays. Additionally, RM1.5 million was allocated to the construction of bike lane and pedestrian pathways in Iskandar Johor.

The rise of bicycle ride sharing

The rise of bike sharing start ups also contribute to the trend as they begin making a footprint here in Malaysia. The commonly seen obike bicycles are starting to be used more frequently but with recent penalties with the local government, there is a need for greater collaboration and understanding between all parties involved.

Cycling around KL used to be unsafe and impractical but with greater interest from Malaysians, we are sure to see a growth in greener transportation.

Do you cycle or plan to cycle around KL? Tell us what you think.